Watch Now This tutorial has a related video course created by the Real Python team. Watch it together with the written tutorial to deepen your understanding: Python Histogram Plotting: NumPy, Matplotlib, Pandas & Seaborn

In this tutorial, you’ll be equipped to make production-quality, presentation-ready Python histogram plots with a range of choices and features.

If you have introductory to intermediate knowledge in Python and statistics, then you can use this article as a one-stop shop for building and plotting histograms in Python using libraries from its scientific stack, including NumPy, Matplotlib, Pandas, and Seaborn.

A histogram is a great tool for quickly assessing a probability distribution that is intuitively understood by almost any audience. Python offers a handful of different options for building and plotting histograms. Most people know a histogram by its graphical representation, which is similar to a bar graph:

This article will guide you through creating plots like the one above as well as more complex ones. Here’s what you’ll cover:

Free Bonus: Short on time? Click here to get access to a free two-page Python histograms cheat sheet that summarizes the techniques explained in this tutorial.

When you are preparing to plot a histogram, it is simplest to not think in terms of bins but rather to report how many times each value appears (a frequency table). A Python dictionary is well-suited for this task:

count_elements() returns a dictionary with unique elements from the sequence as keys and their frequencies (counts) as values. Within the loop over seq, hist[i] = hist.get(i, 0) + 1 says, “for each element of the sequence, increment its corresponding value in hist by 1.”

In fact, this is precisely what is done by the collections.Counter class from Python’s standard library, which subclasses a Python dictionary and overrides its .update() method:

You can confirm that your handmade function does virtually the same thing as collections.Counter by testing for equality between the two:

Technical Detail: The mapping from count_elements() above defaults to a more highly optimized C function if it is available. Within the Python function count_elements(), one micro-optimization you could make is to declare get = hist.get before the for-loop. This would bind a method to a variable for faster calls within the loop.

It can be helpful to build simplified functions from scratch as a first step to understanding more complex ones. Let’s further reinvent the wheel a bit with an ASCII histogram that takes advantage of Python’s output formatting:

This function creates a sorted frequency plot where counts are represented as tallies of plus (+) symbols. Calling sorted() on a dictionary returns a sorted list of its keys, and then you access the corresponding value for each with counted[k]. To see this in action, you can create a slightly larger dataset with Python’s random module:

Here, you’re simulating plucking from vals with frequencies given by freq (a generator expression). The resulting sample data repeats each value from vals a certain number of times between 5 and 15.

Note: random.seed() is use to seed, or initialize, the underlying pseudorandom number generator (PRNG) used by random. It may sound like an oxymoron, but this is a way of making random data reproducible and deterministic. That is, if you copy the code here as is, you should get exactly the same histogram because the first call to random.randint() after seeding the generator will produce identical “random” data using the Mersenne Twister.

Building Up From the Base: Histogram Calculations in NumPy

Thus far, you have been working with what could best be called “frequency tables.” But mathematically, a histogram is a mapping of bins (intervals) to frequencies. More technically, it can be used to approximate the probability density function (PDF) of the underlying variable.

Moving on from the “frequency table” above, a true histogram first “bins” the range of values and then counts the number of values that fall into each bin. This is what NumPy’s histogram() function does, and it is the basis for other functions you’ll see here later in Python libraries such as Matplotlib and Pandas.

Consider a sample of floats drawn from the Laplace distribution. This distribution has fatter tails than a normal distribution and has two descriptive parameters (location and scale):

In this case, you’re working with a continuous distribution, and it wouldn’t be very helpful to tally each float independently, down to the umpteenth decimal place. Instead, you can bin or “bucket” the data and count the observations that fall into each bin. The histogram is the resulting count of values within each bin:

This result may not be immediately intuitive. np.histogram() by default uses 10 equally sized bins and returns a tuple of the frequency counts and corresponding bin edges. They are edges in the sense that there will be one more bin edge than there are members of the histogram:

A very condensed breakdown of how the bins are constructed by NumPy looks like this:

The case above makes a lot of sense: 10 equally spaced bins over a peak-to-peak range of 23 means intervals of width 2.3.

From there, the function delegates to either np.bincount() or np.searchsorted(). bincount() itself can be used to effectively construct the “frequency table” that you started off with here, with the distinction that values with zero occurrences are included:

Visualizing Histograms with Matplotlib and Pandas

Now that you’ve seen how to build a histogram in Python from the ground up, let’s see how other Python packages can do the job for you. Matplotlib provides the functionality to visualize Python histograms out of the box with a versatile wrapper around NumPy’s histogram():

As defined earlier, a plot of a histogram uses its bin edges on the x-axis and the corresponding frequencies on the y-axis. In the chart above, passing bins='auto' chooses between two algorithms to estimate the “ideal” number of bins. At a high level, the goal of the algorithm is to choose a bin width that generates the most faithful representation of the data. For more on this subject, which can get pretty technical, check out Choosing Histogram Bins from the Astropy docs.

pandas.DataFrame.histogram() is similar but produces a histogram for each column of data in the DataFrame.

In this tutorial, you’ve been working with samples, statistically speaking. Whether the data is discrete or continuous, it’s assumed to be derived from a population that has a true, exact distribution described by just a few parameters.

A kernel density estimation (KDE) is a way to estimate the probability density function (PDF) of the random variable that “underlies” our sample. KDE is a means of data smoothing.

Sticking with the Pandas library, you can create and overlay density plots using plot.kde(), which is available for both Series and DataFrame objects. But first, let’s generate two distinct data samples for comparison:

Now, to plot each histogram on the same Matplotlib axes:

These methods leverage SciPy’s gaussian_kde(), which results in a smoother-looking PDF.

If you take a closer look at this function, you can see how well it approximates the “true” PDF for a relatively small sample of 1000 data points. Below, you can first build the “analytical” distribution with scipy.stats.norm(). This is a class instance that encapsulates the statistical standard normal distribution, its moments, and descriptive functions. Its PDF is “exact” in the sense that it is defined precisely as norm.pdf(x) = exp(-x**2/2) / sqrt(2*pi).

Building from there, you can take a random sample of 1000 datapoints from this distribution, then attempt to back into an estimation of the PDF with scipy.stats.gaussian_kde():

This is a bigger chunk of code, so let’s take a second to touch on a few key lines:

A Fancy Alternative with Seaborn

Let’s bring one more Python package into the mix. Seaborn has a displot() function that plots the histogram and KDE for a univariate distribution in one step. Using the NumPy array d from ealier:

The call above produces a KDE. There is also optionality to fit a specific distribution to the data. This is different than a KDE and consists of parameter estimation for generic data and a specified distribution name:

Again, note the slight difference. In the first case, you’re estimating some unknown PDF; in the second, you’re taking a known distribution and finding what parameters best describe it given the empirical data.

Other Tools in Pandas

In addition to its plotting tools, Pandas also offers a convenient .value_counts() method that computes a histogram of non-null values to a Pandas Series:

Elsewhere, pandas.cut() is a convenient way to bin values into arbitrary intervals. Let’s say you have some data on ages of individuals and want to bucket them sensibly:

What’s nice is that both of these operations ultimately utilize Cython code that makes them competitive on speed while maintaining their flexibility.

Alright, So Which Should I Use?

At this point, you’ve seen more than a handful of functions and methods to choose from for plotting a Python histogram. How do they compare? In short, there is no “one-size-fits-all.” Here’s a recap of the functions and methods you’ve covered thus far, all of which relate to breaking down and representing distributions in Python:

Free Bonus: Short on time? Click here to get access to a free two-page Python histograms cheat sheet that summarizes the techniques explained in this tutorial.

You can also find the code snippets from this article together in one script at the Real Python materials page.

With that, good luck creating histograms in the wild. Hopefully one of the tools above will suit your needs. Whatever you do, just don’t use a pie chart.

Watch Now This tutorial has a related video course created by the Real Python team. Watch it together with the written tutorial to deepen your understanding: Python Histogram Plotting: NumPy, Matplotlib, Pandas & Seaborn Brad is a software engineer and a member of the Real Python Tutorial Team. 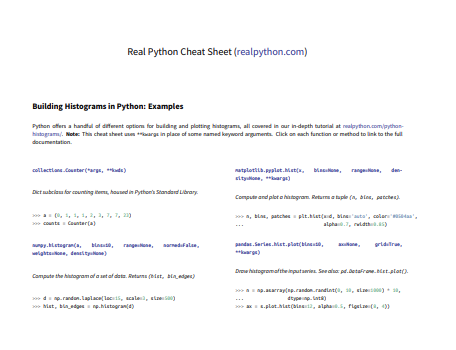