Face Recognition with Python, in Under 25 Lines of Code

In this article, we’ll look at a surprisingly simple way to get started with face recognition using Python and the open source library OpenCV.

Before you ask any questions in the comments section:

OpenCV is the most popular library for computer vision. Originally written in C/C++, it now provides bindings for Python.

OpenCV uses machine learning algorithms to search for faces within a picture. Because faces are so complicated, there isn’t one simple test that will tell you if it found a face or not. Instead, there are thousands of small patterns and features that must be matched. The algorithms break the task of identifying the face into thousands of smaller, bite-sized tasks, each of which is easy to solve. These tasks are also called classifiers.

For something like a face, you might have 6,000 or more classifiers, all of which must match for a face to be detected (within error limits, of course). But therein lies the problem: for face detection, the algorithm starts at the top left of a picture and moves down across small blocks of data, looking at each block, constantly asking, “Is this a face? … Is this a face? … Is this a face?” Since there are 6,000 or more tests per block, you might have millions of calculations to do, which will grind your computer to a halt.

To get around this, OpenCV uses cascades. What’s a cascade? The best answer can be found in the dictionary: “a waterfall or series of waterfalls.”

Like a series of waterfalls, the OpenCV cascade breaks the problem of detecting faces into multiple stages. For each block, it does a very rough and quick test. If that passes, it does a slightly more detailed test, and so on. The algorithm may have 30 to 50 of these stages or cascades, and it will only detect a face if all stages pass.

The advantage is that the majority of the picture will return a negative during the first few stages, which means the algorithm won’t waste time testing all 6,000 features on it. Instead of taking hours, face detection can now be done in real time.

Though the theory may sound complicated, in practice it is quite easy. The cascades themselves are just a bunch of XML files that contain OpenCV data used to detect objects. You initialize your code with the cascade you want, and then it does the work for you.

Since face detection is such a common case, OpenCV comes with a number of built-in cascades for detecting everything from faces to eyes to hands to legs. There are even cascades for non-human things. For example, if you run a banana shop and want to track people stealing bananas, this guy has built one for that!

First, you need to find the correct setup file for your operating system.

I found that installing OpenCV was the hardest part of the task. If you get strange unexplainable errors, it could be due to library clashes, 32/64 bit differences, and so on. I found it easiest to just use a Linux virtual machine and install OpenCV from scratch.

Once you have completed the installation, you can test whether or not it works by firing up a Python session and typing:

If you don’t get any errors, you can move on to the next part.

Let’s break down the actual code, which you can download from the repo. Grab the face_detect.py script, the abba.png pic, and the haarcascade_frontalface_default.xml.

You first pass in the image and cascade names as command-line arguments. We’ll use the ABBA image as well as the default cascade for detecting faces provided by OpenCV.

Now we create the cascade and initialize it with our face cascade. This loads the face cascade into memory so it’s ready for use. Remember, the cascade is just an XML file that contains the data to detect faces.

Here we read the image and convert it to grayscale. Many operations in OpenCV are done in grayscale.

This function detects the actual face and is the key part of our code, so let’s go over the options:

Note: I took commonly used values for these fields. In real life, you would experiment with different values for the window size, scale factor, and so on until you found one that works best for you.

The function returns a list of rectangles in which it believes it found a face. Next, we will loop over where it thinks it found something.

This function returns 4 values: the x and y location of the rectangle, and the rectangle’s width and height (w , h).

We use these values to draw a rectangle using the built-in rectangle() function.

In the end, we display the image and wait for the user to press a key.

Let’s test against the ABBA photo:

That worked. How about another photo:

That … is not a face. Let’s try again. I changed the parameters and found that setting the scaleFactor to 1.2 got rid of the wrong face.

Well, the first photo was taken fairly close up with a high quality camera. The second one seems to have been taken from afar and possibly with a mobile phone. This is why the scaleFactor had to be modified. As I said, you’ll have to set up the algorithm on a case-by-case basis to avoid false positives.

Be warned though that since this is based on machine learning, the results will never be 100% accurate. You will get good enough results in most cases, but occasionally the algorithm will identify incorrect objects as faces.

The final code can be found here.

Extending to a Webcam

What if you want to use a webcam? OpenCV grabs each frame from the webcam, and you can then detect faces by processing each frame. You will need a powerful computer, but my five-year-old laptop seems to cope fine, as long as I don’t dance around too much.

Update: The next article is live. Check out Face Detection in Python Using a Webcam!

I will be covering this and more in my upcoming book Python for Science and Engineering, which is currently on Kickstarter. I will also cover machine learning, for those who are interested in it. Shantnu has worked in the low level/embedded domain for ten years. Shantnu suffered at the hands of C/C++ for several years before he discovered Python, and it felt like a breath of fresh air. 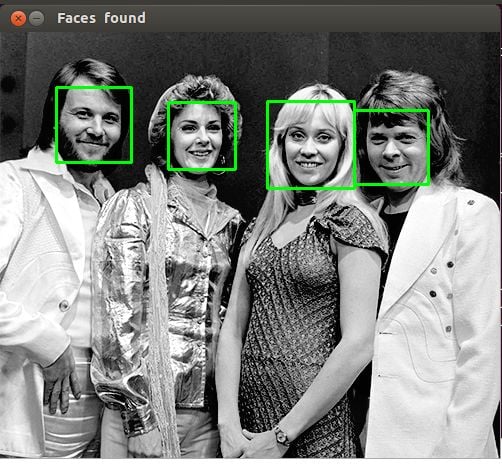